Louise and Harry, two of many expat friends I’ve made since moving to Malmö, threw a Brexit Halloween party last week with the words ”Brexit: all tricks, no treats — come help us crash out of the EU”. Rarely have I come across such an apt summary of the shambles that is Brexit. Louise and Harry, like myself, moved to Malmö in 2016, which is also the year of the Brexit referendum. I was quite nervous about the referendum, and, as we now know, for good reason. Here’s what I wrote about it at the time. The party invitations went out when the Brexit deadline was October 31 (having already been postponed twice). As we all know, the deadline has once again been postponed and is now January 31. Quite the shambles — but at least the Brexit party wasn’t! 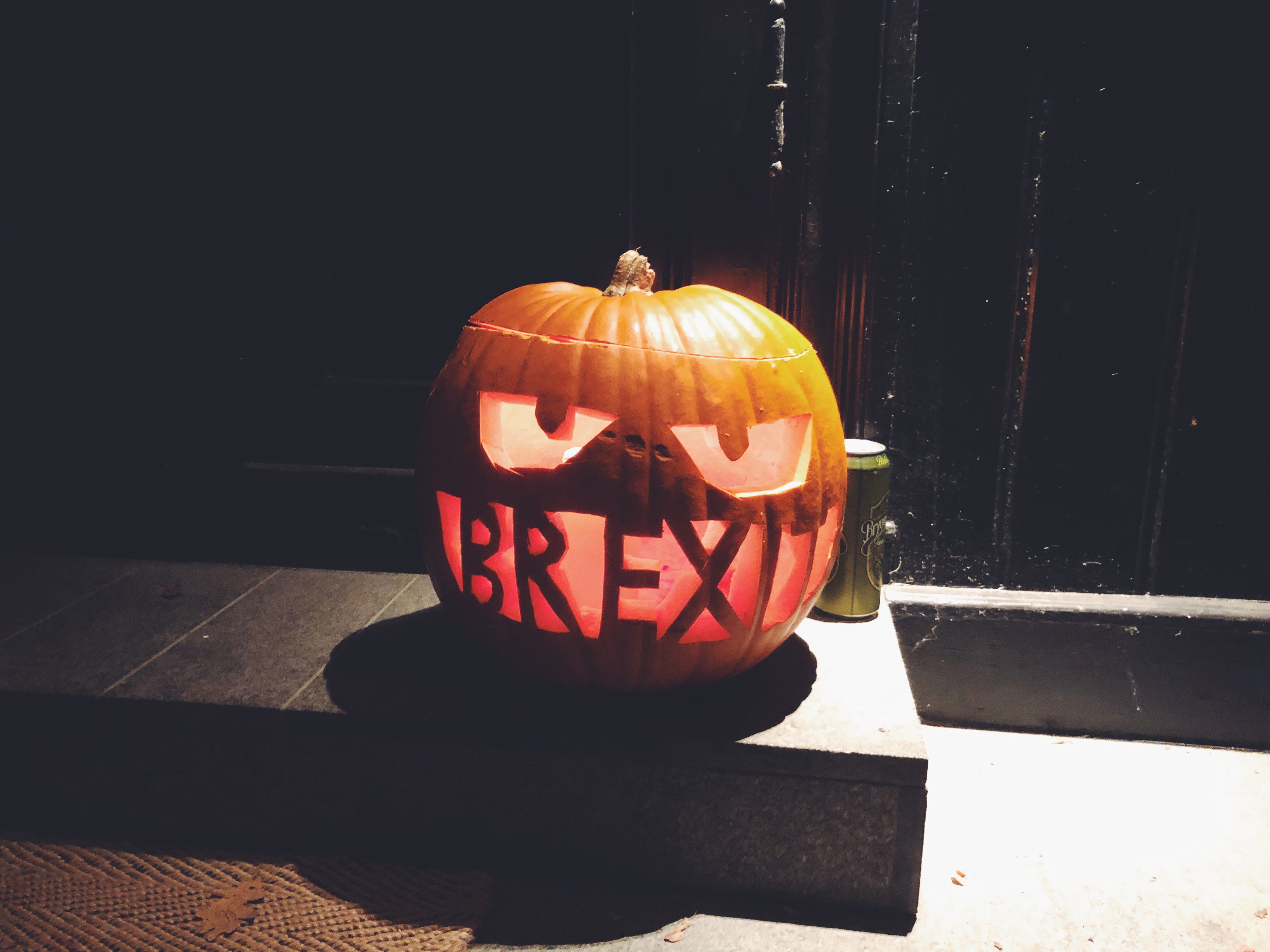 Perhaps the scariest pumpkin yet.

Louise went as the ghost of Europe (I mean this is almost too sad to be funny, but it’s nevertheless a pretty suitable costume) and Vicky went as Jacob Rees-Mogg, a particularly scary ultra-conservative member of the Tory party. Among other things, he has voted to repeal the UK Human Rights Act not once but twice, he voted against legalising abortion in Northern Ireland, he voted against legalising same-sex marriage, AND he was casually lying down (!) in parliament during a recent debate of Brexit (as portrayed by Vicky in above shot). Not a person I’d want at a dinner party, or any party. 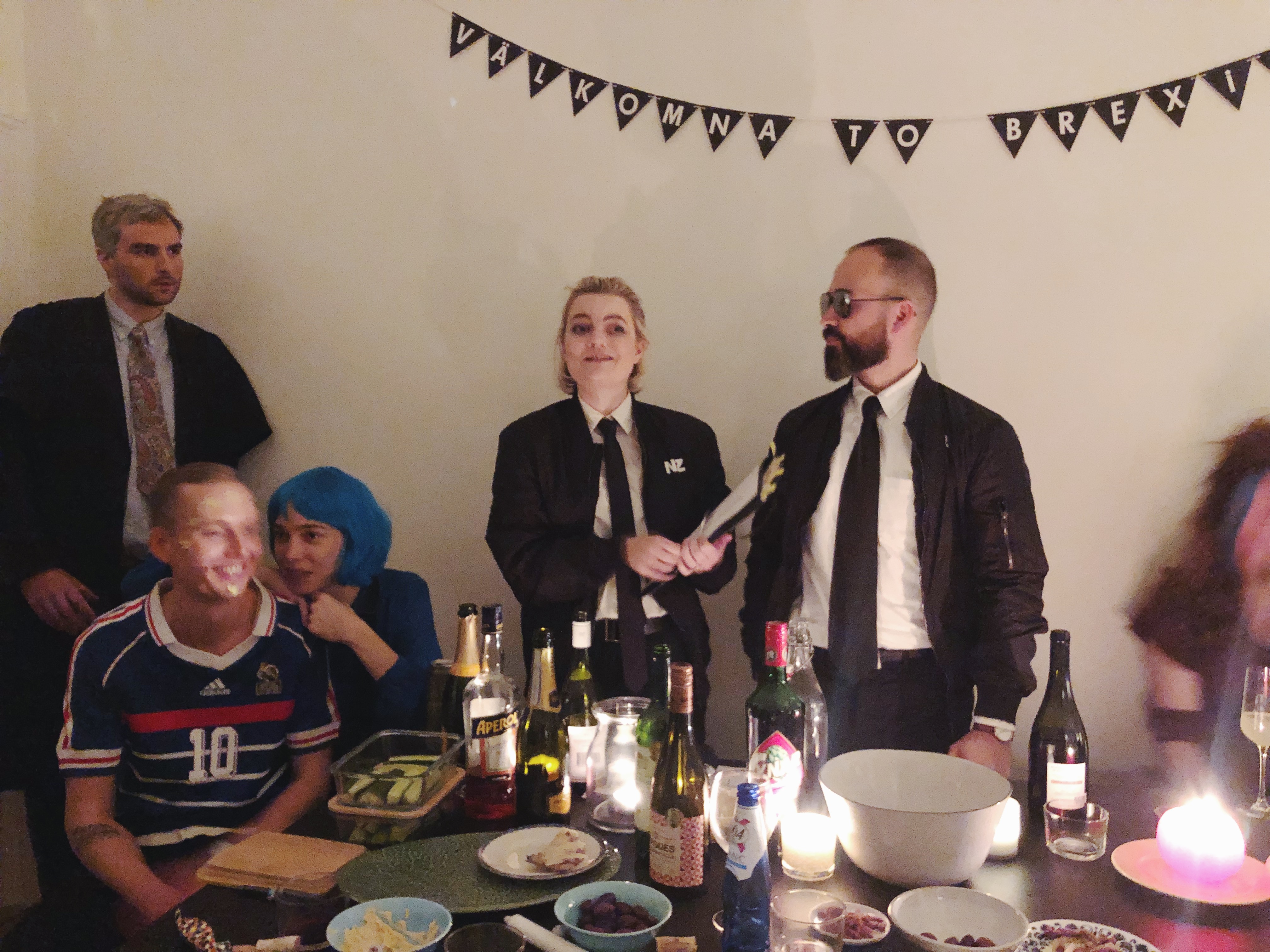 Representatives from the immigration services of New Zeeland were there and made everyone go through a particularly difficult immigration test. Again, almost too sad to be funny…

Which is why it was great that some people had actually funny costumes. H went as the flag of the EU (hooray!) and Jasmin and Per went as Posh Spice and Becks. 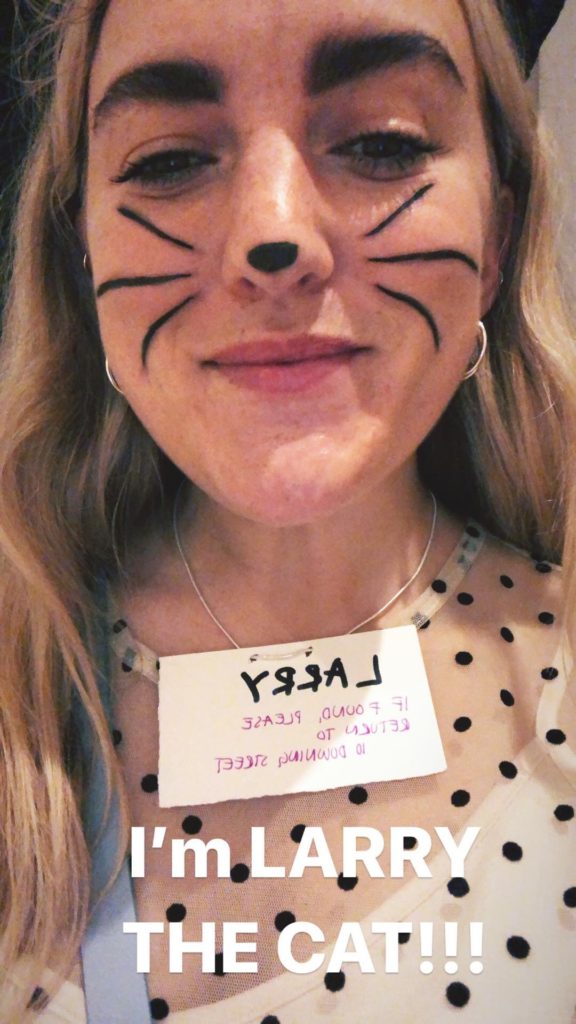 And me? I went as Larry the Cat, the cat and Chief Mouser that lives at 10 Downing Street, the residence of the Prime Minister. Larry has lived at Number 10 since 2011 and has served under three different Prime Ministers. I love the story of Larry. He is a rescue cat (much like my own cat, Katten), his upkeep is funded by Number 10 staff, and some numbers indicate that Larry’s popularity has resulted in a surge of 15% more people adopting cats. He has his own Twitter account and whoever runs it is bloody hilarious. I think if there’s anything the people of Britain deserve right now, it’s Larry the Cat. With some love sprinkled on top.